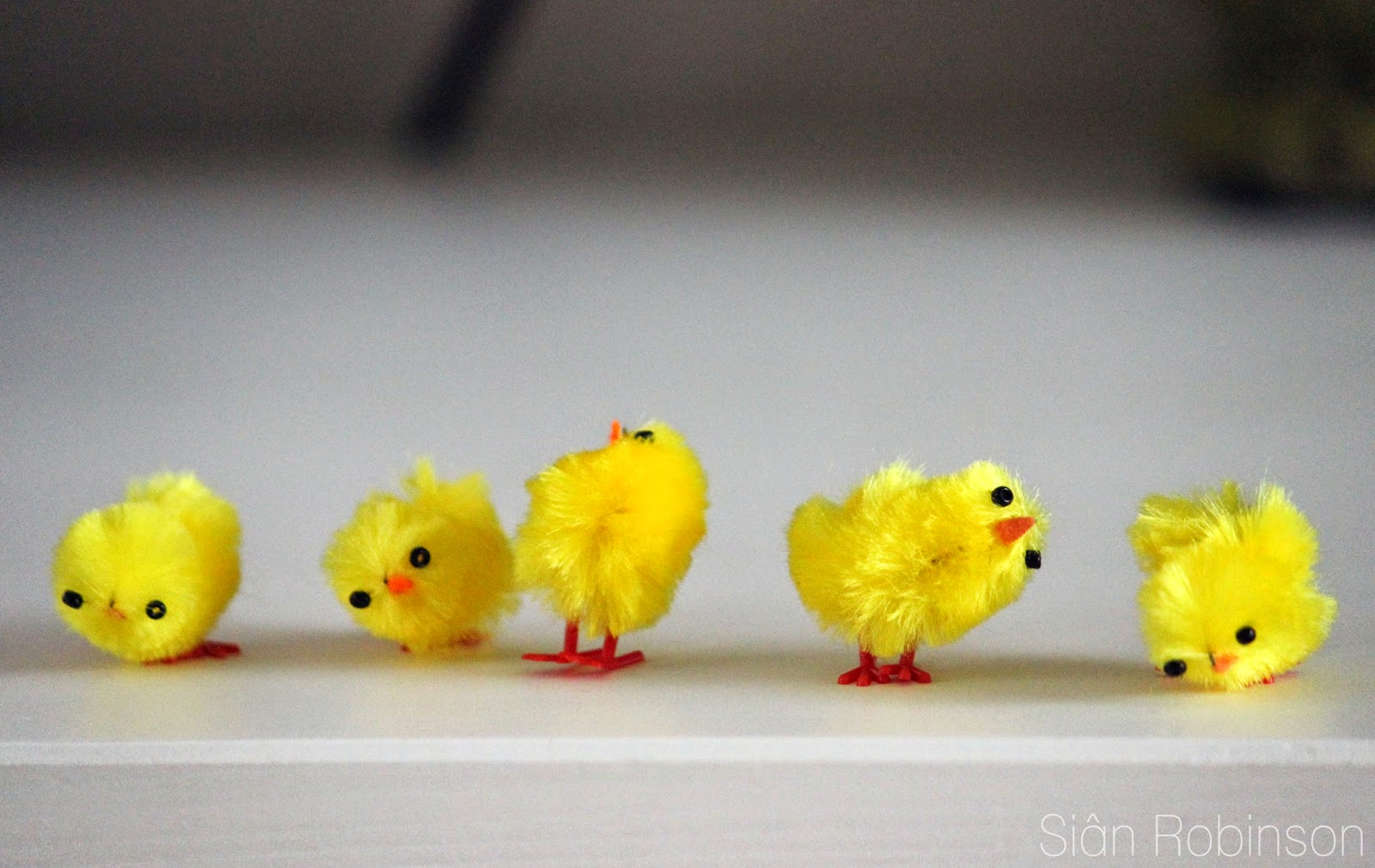 I think the bewildered chicks above would agree that each year the Easter traditions we do in this house seem to get a little more elaborate. I had excitedly bought their Easter gifts months before. So long before in fact that I forgot what I had bought them. So it was a surprise to me too.

Like these eggs cups I bought from Amazon. One for each of us. 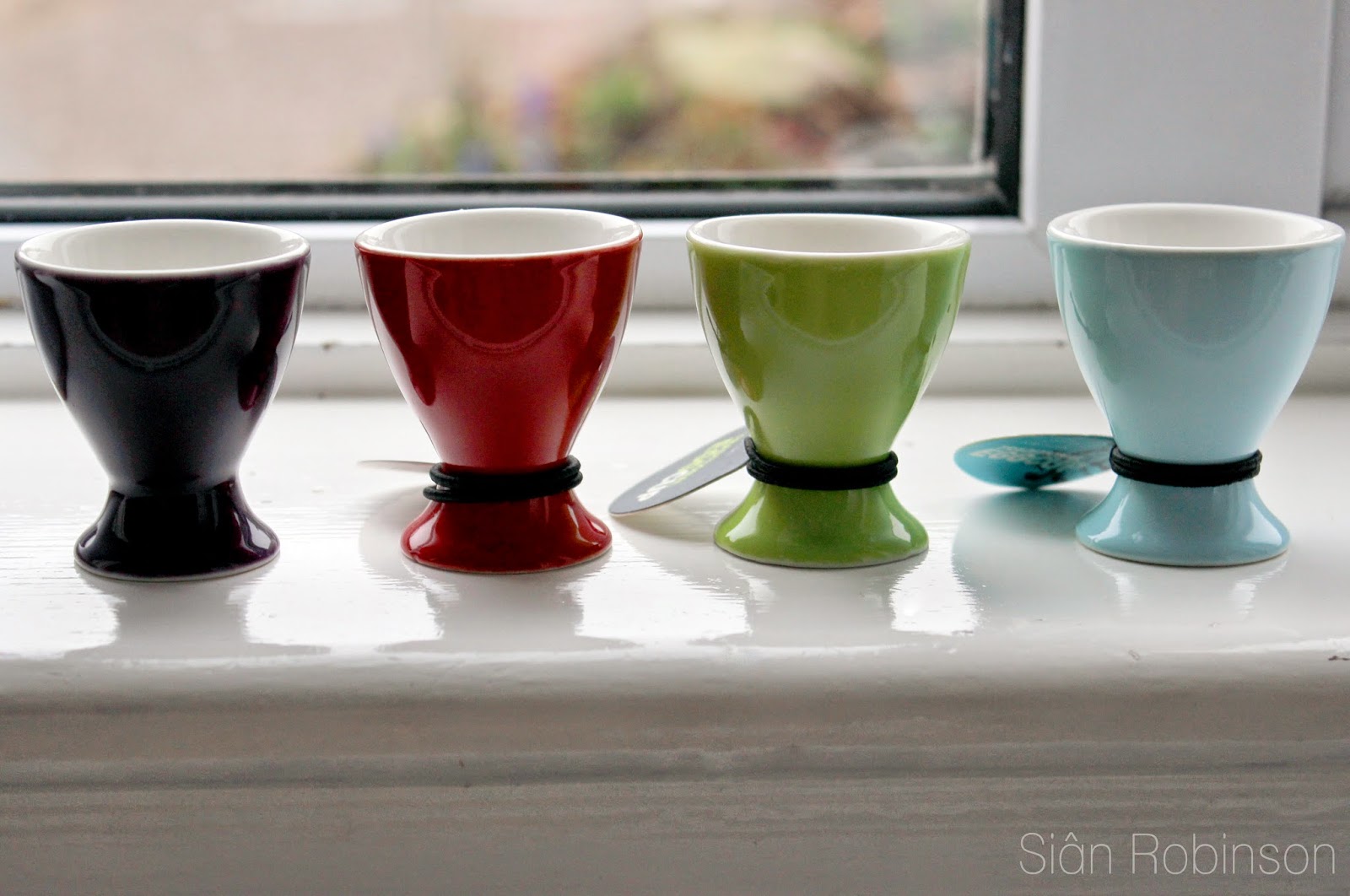 It's not normal to get this excited over eggs cups right? Don't worry the boys got gift for them as well...

But it's really Pinterest's fault...

With it's seductive visual charms. For many hours I poured over pictures of Easter decorations and activities that always look so perfect better than my clumsy attempts. Which is how I found myself painting sticks from the garden the night before Easter. You know so I could make this...
As I was lovingly painting these sticks Tim kept looking at me and shaking his head. I wonder if he was thinking that I need to get out more...

He is probably right...

And I found myself outside at 5am shivering in my PJ's hiding eggs for the Easter bunny because the boys wake up so damn early! Tim warm and snugly in bed probably thought I'm a crazy person...

He is probably right...

But the effort was worth it this Easter... 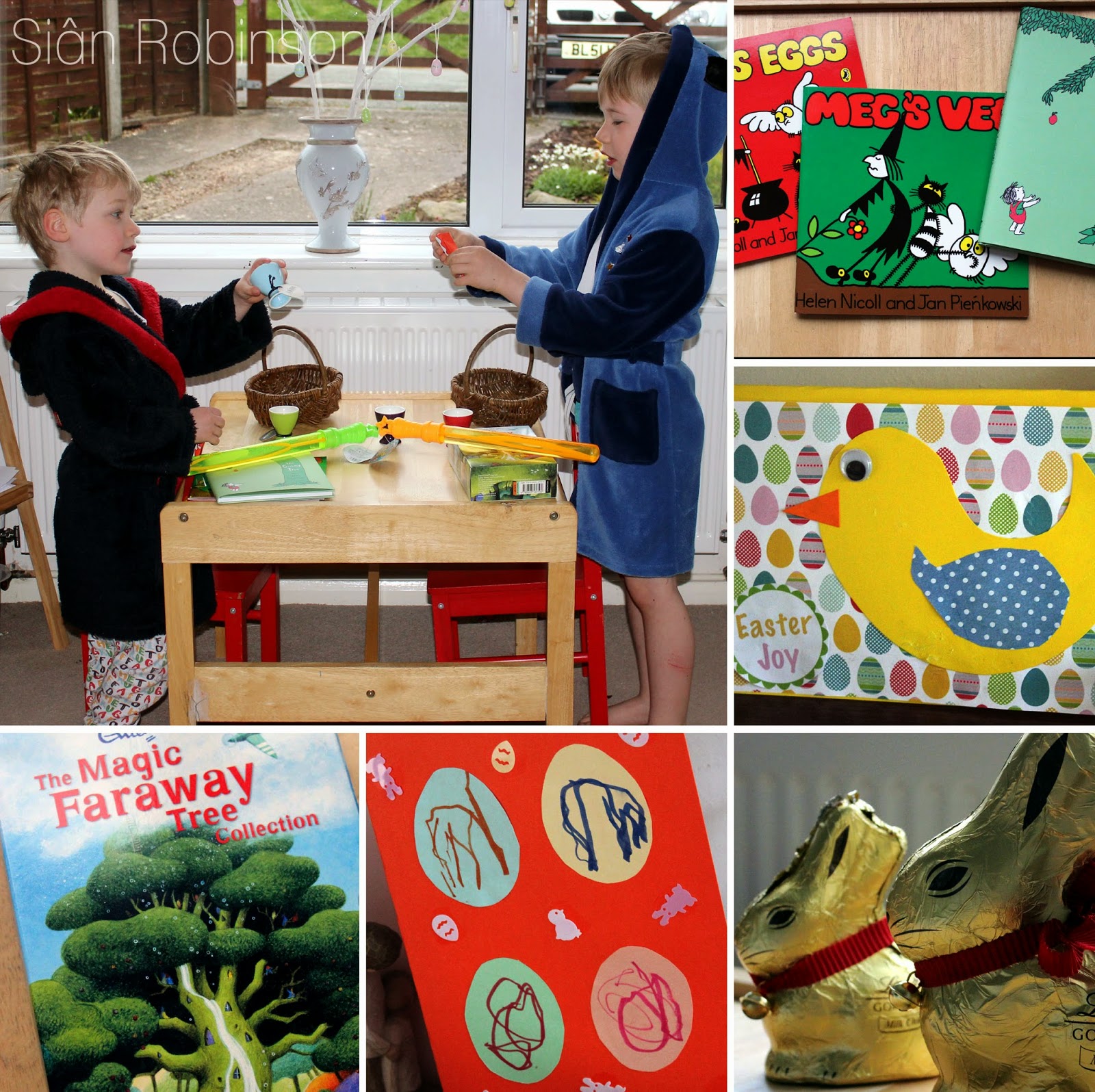 We ate eggs obviously for breakfast... 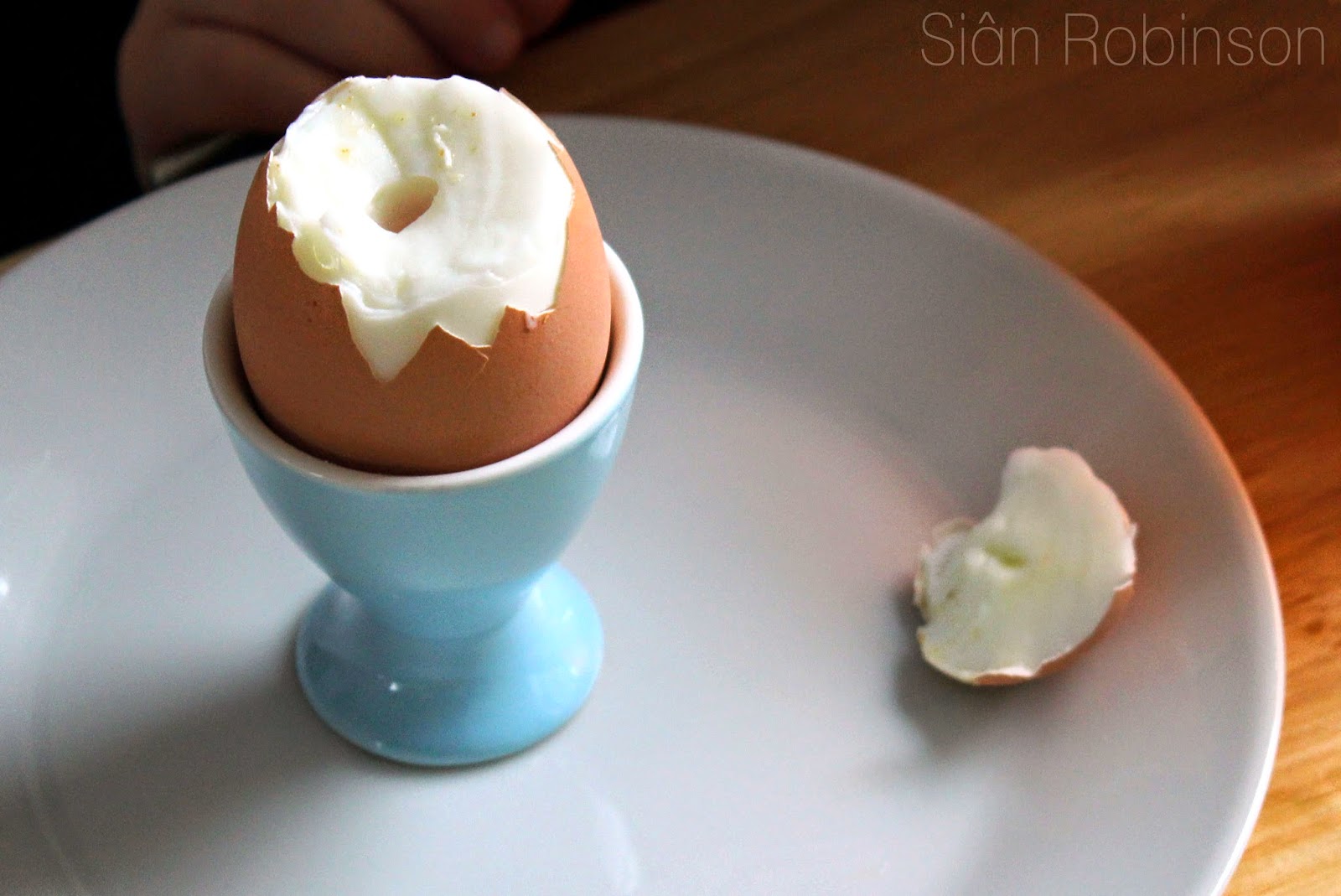 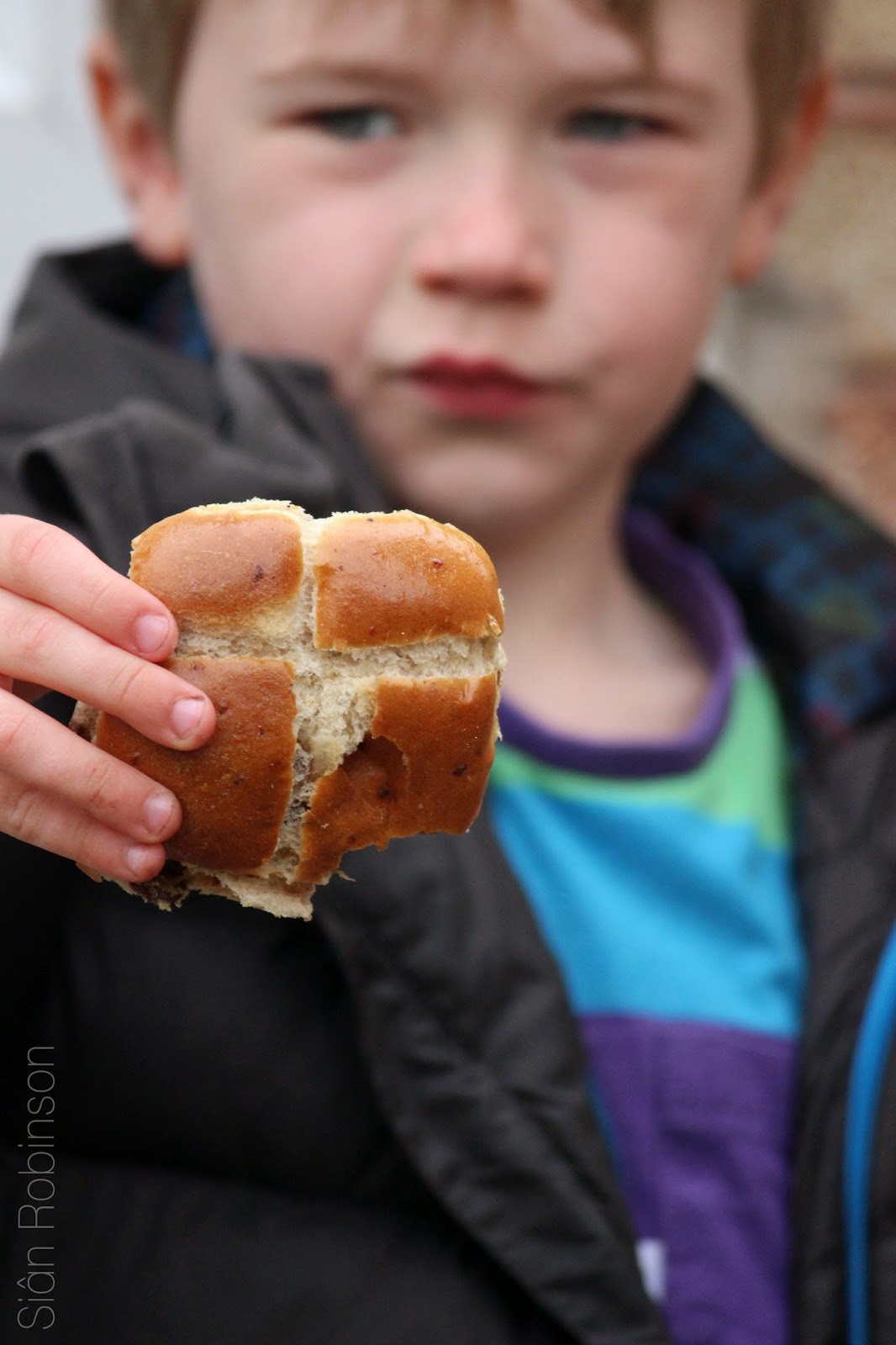 We went on our Easter hunt... 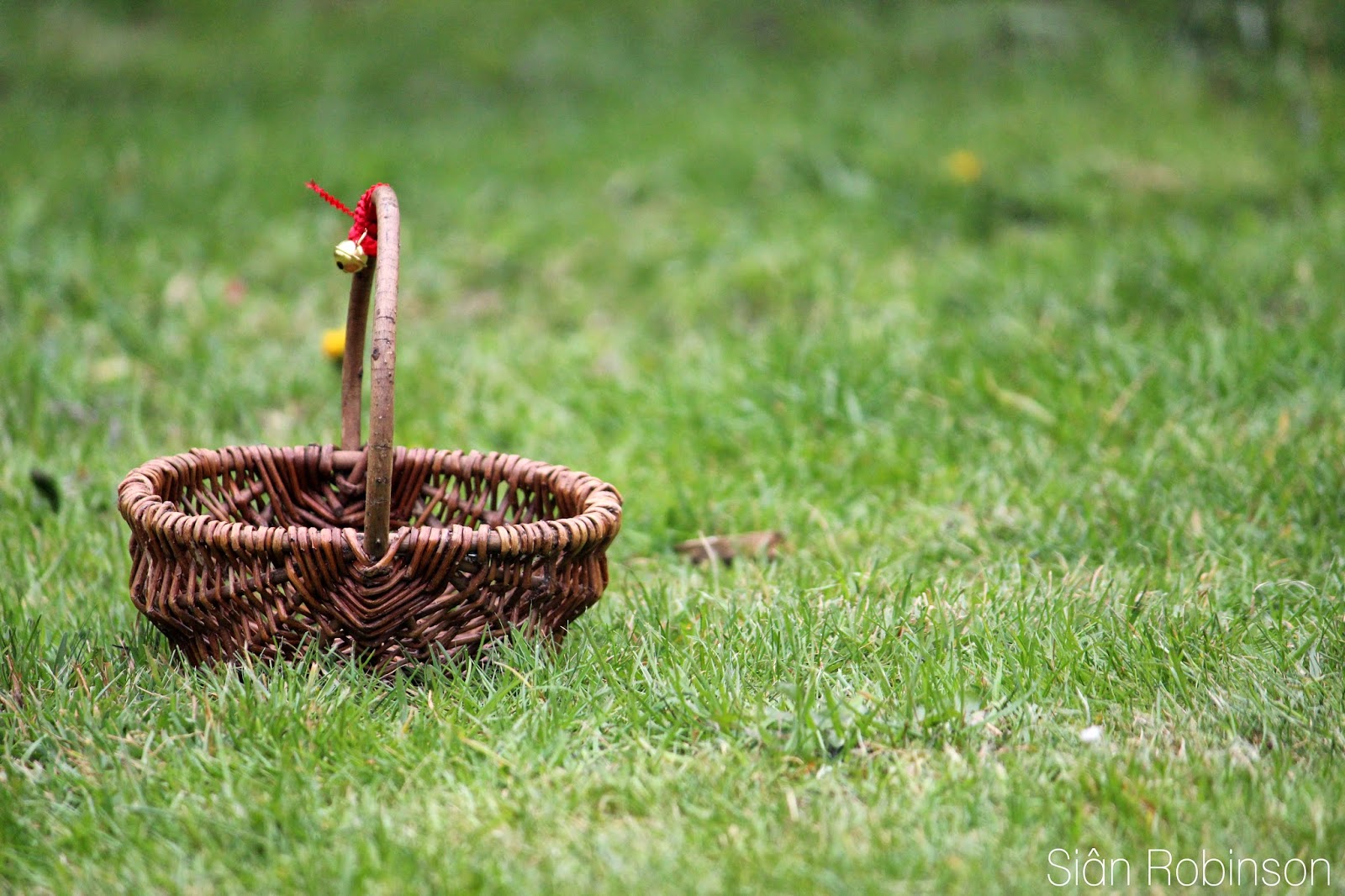 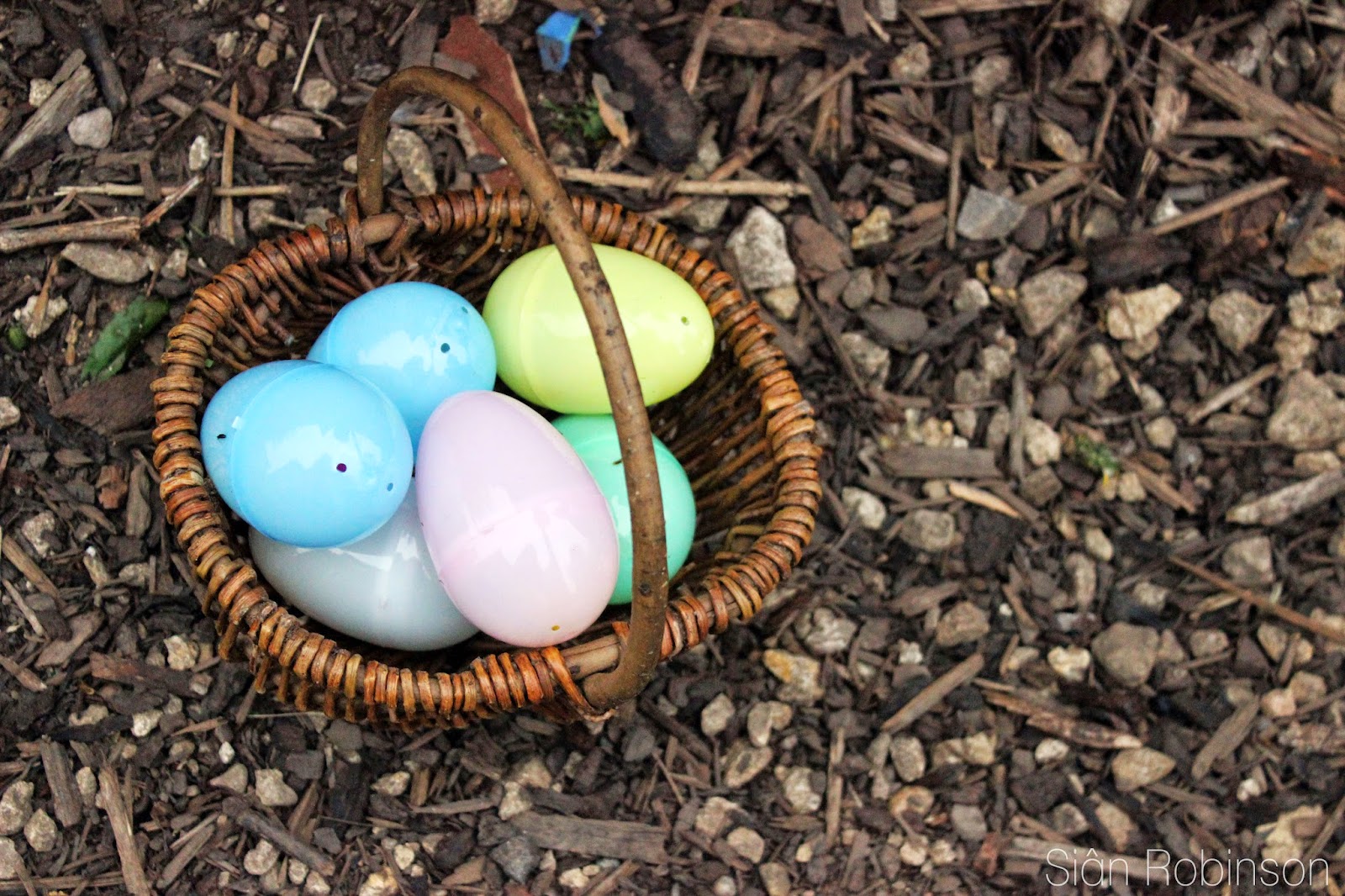 Which is serious business, no messing around... 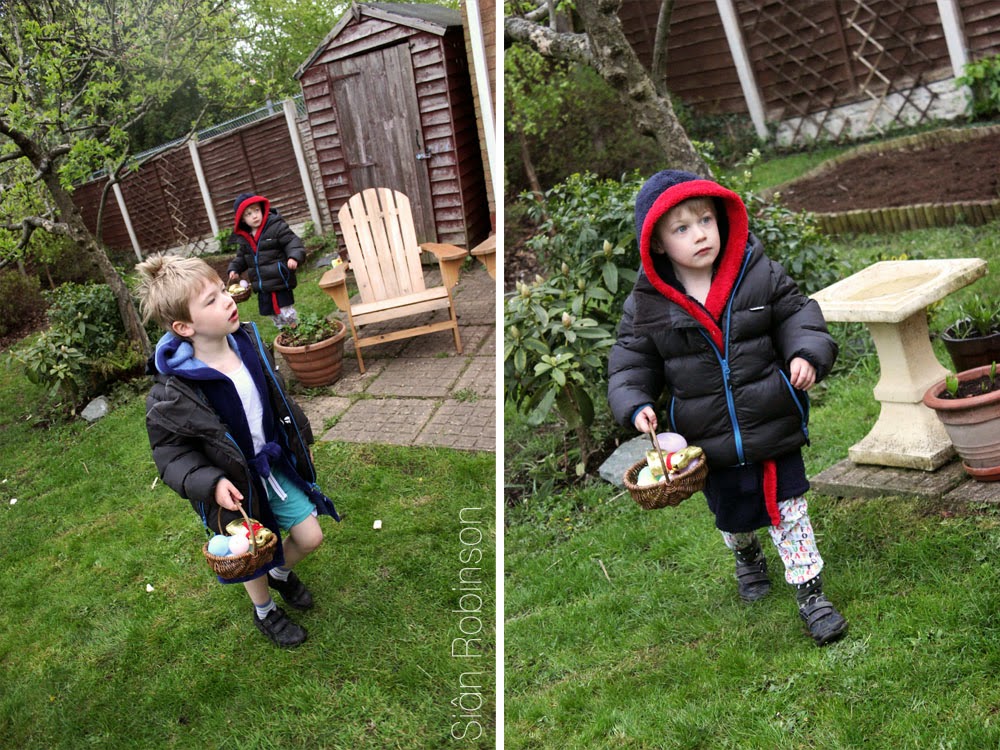 With rewards inside each find... 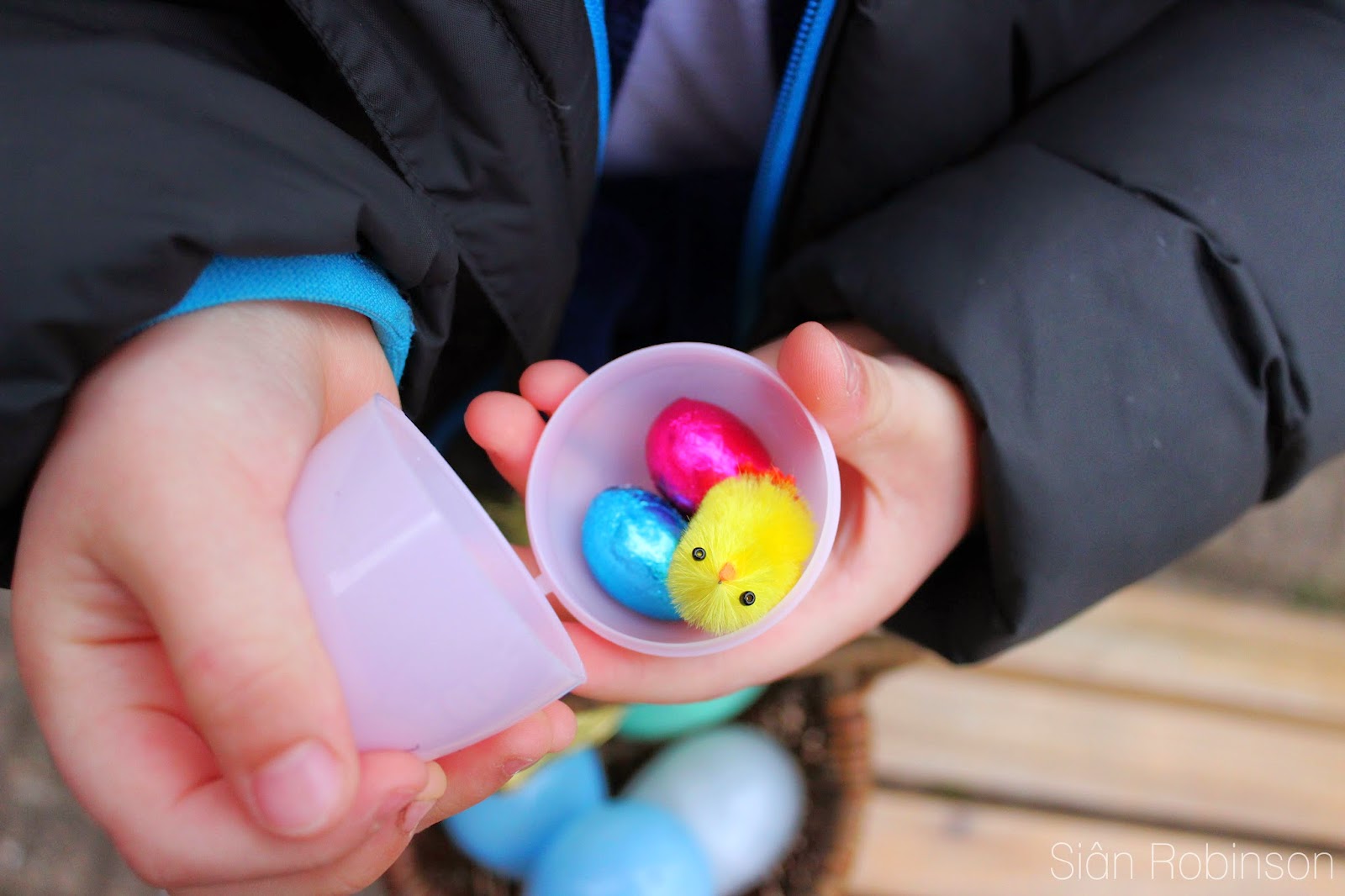 Because I forgot to buy wax crayons we elaborated on last years naturally dyed Easter eggs with some stickers, string, elastic bands, crayons... 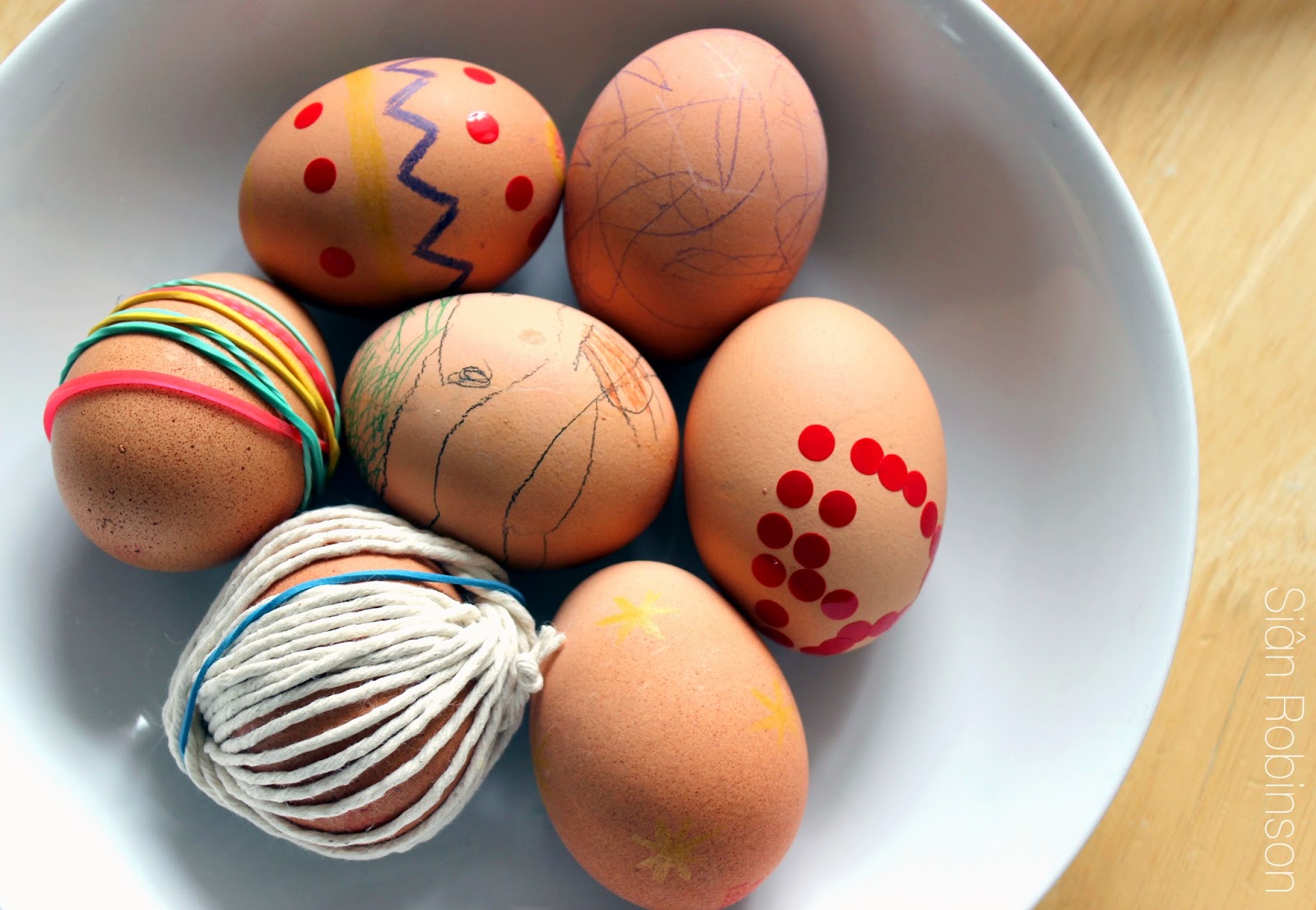 We dyed them in water and:
Strong coffee = a rich dark brown
Onion and Turmeric = orange yellow
Blueberries = dark purple (actually it was more of a grey)
Red onion = deep red colour 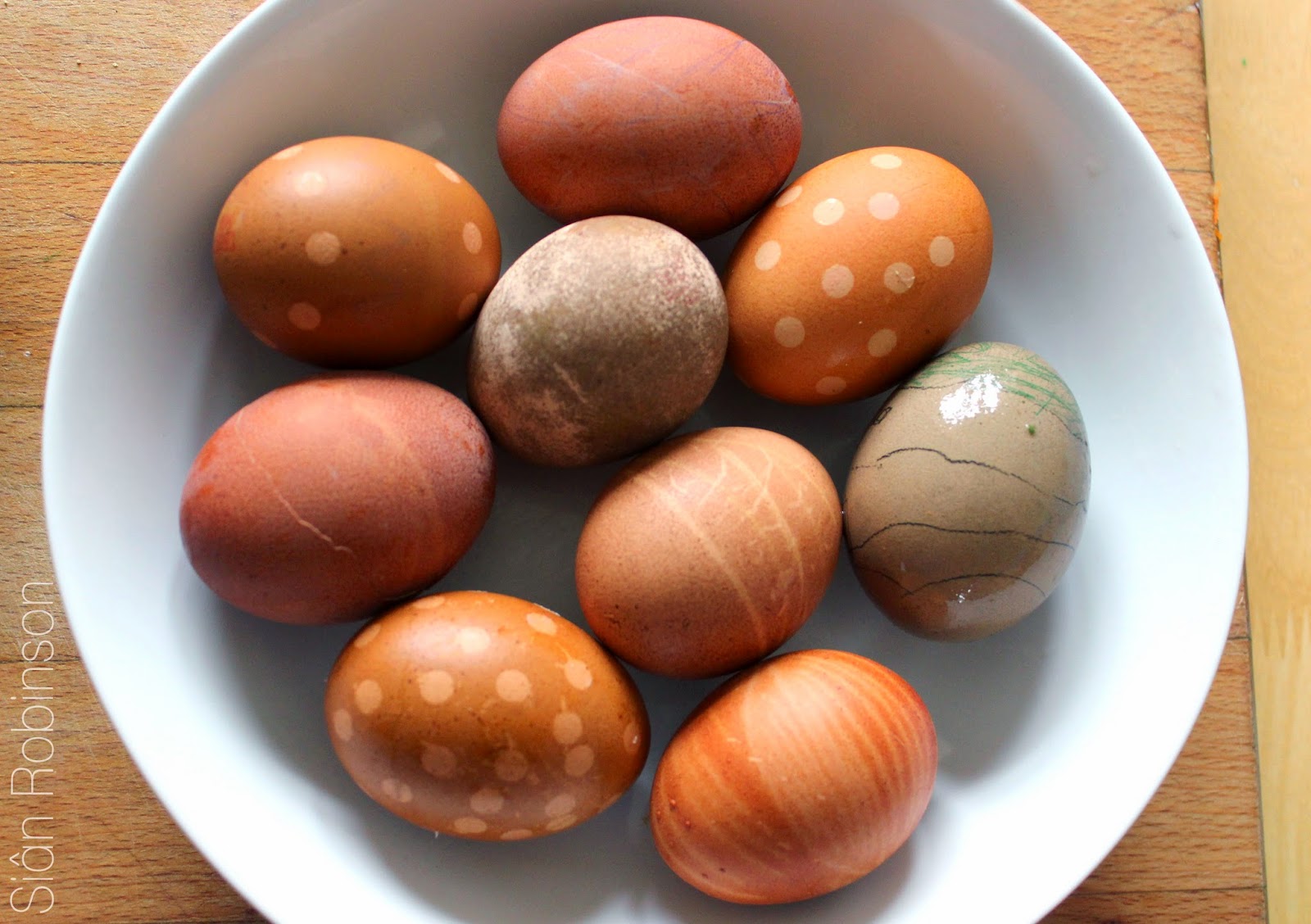 And the cracks create cool lines underneath... 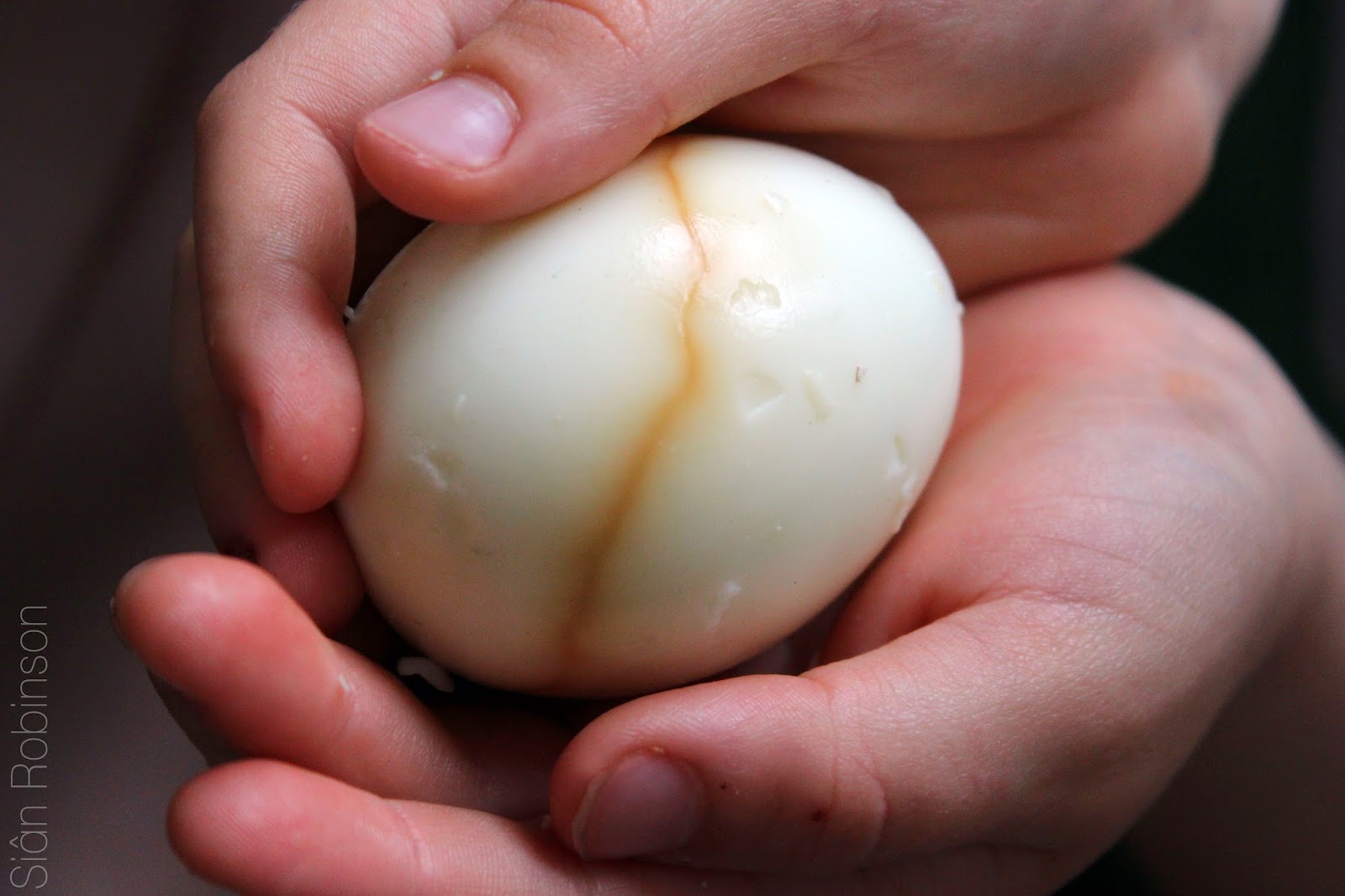 And as always we made Easter nests...

With lots of these... 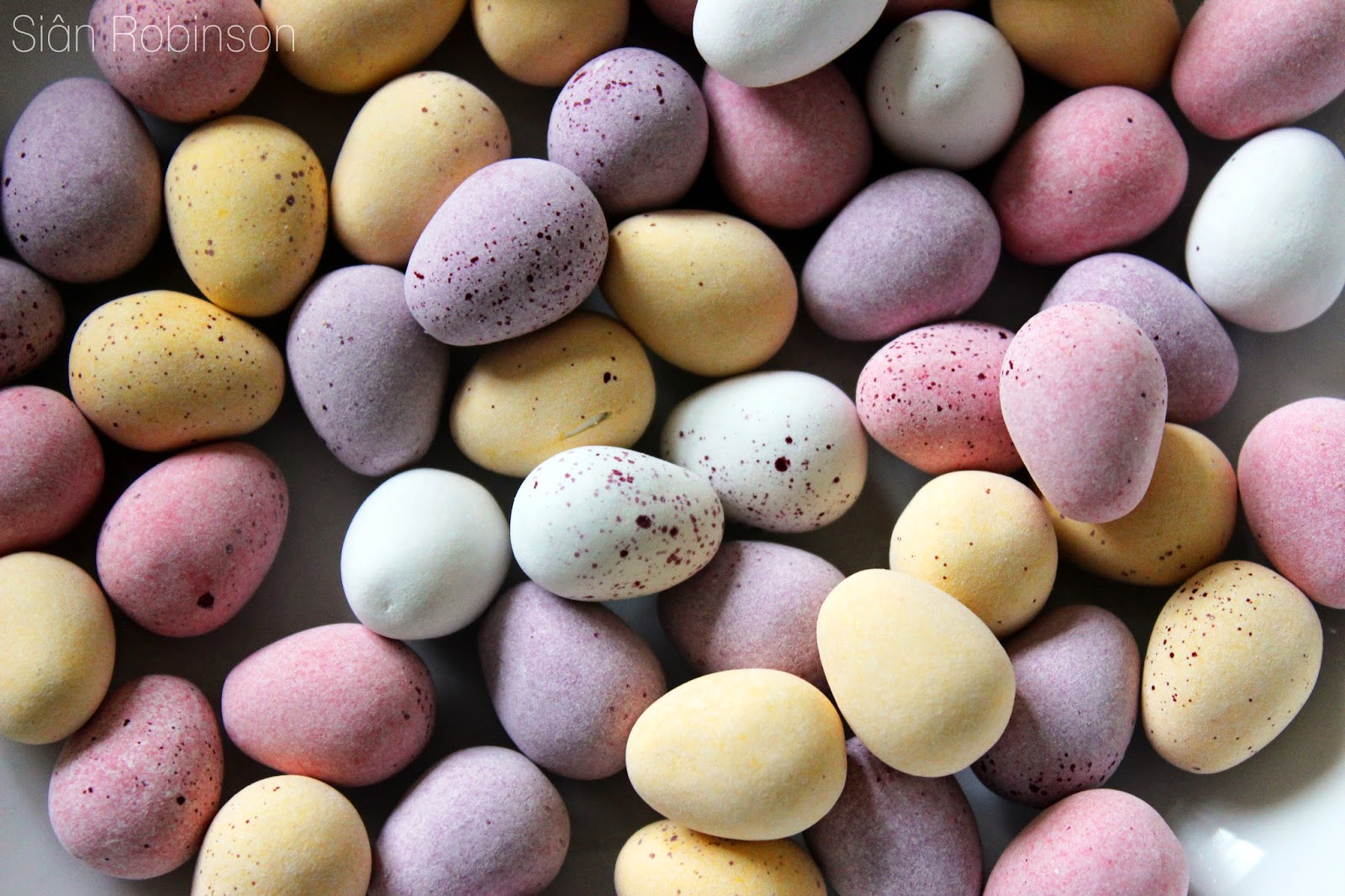 Some may have accidentally fallen into my mouth therefore didn't make it to the nests... 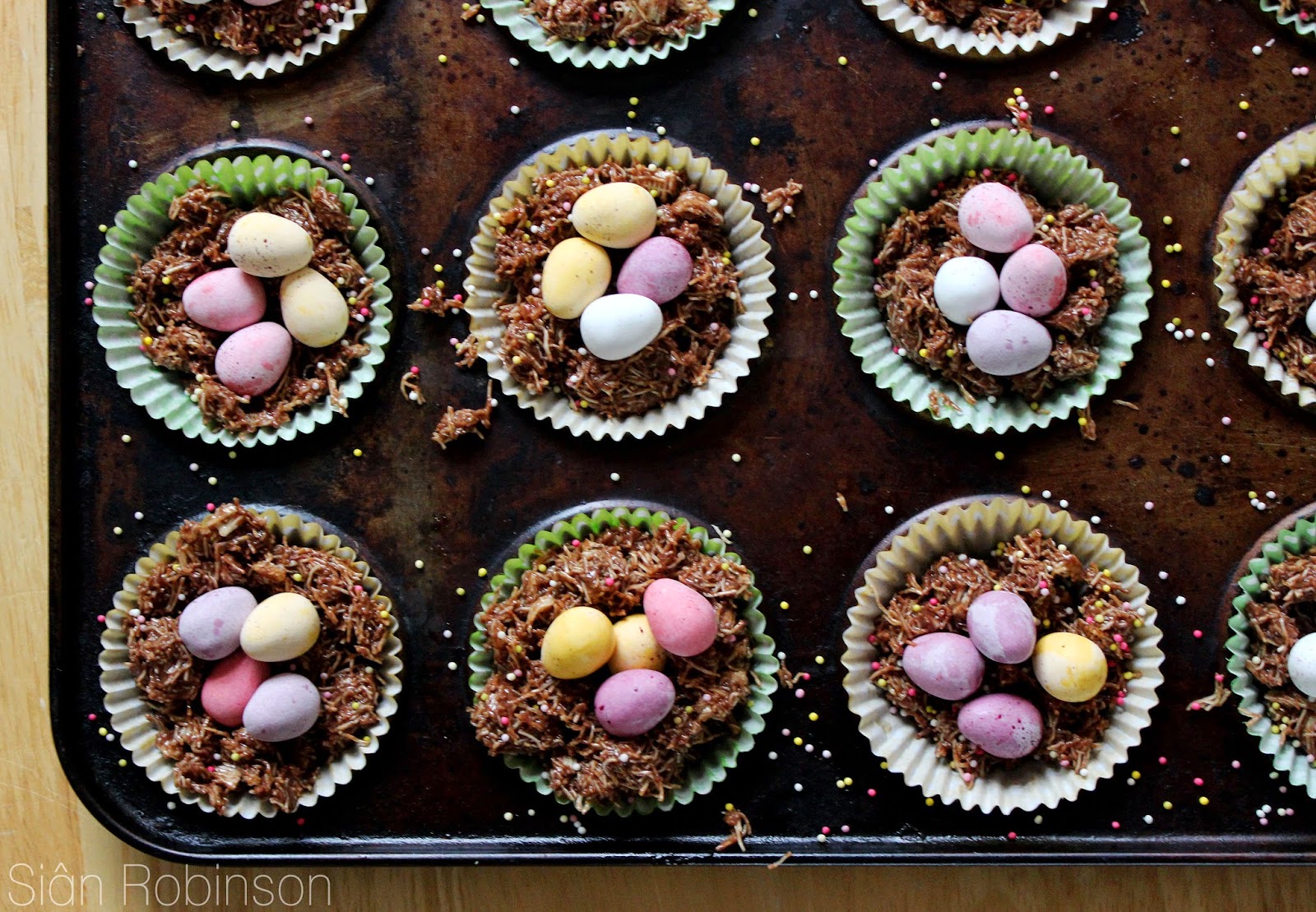 Then some bubble play... 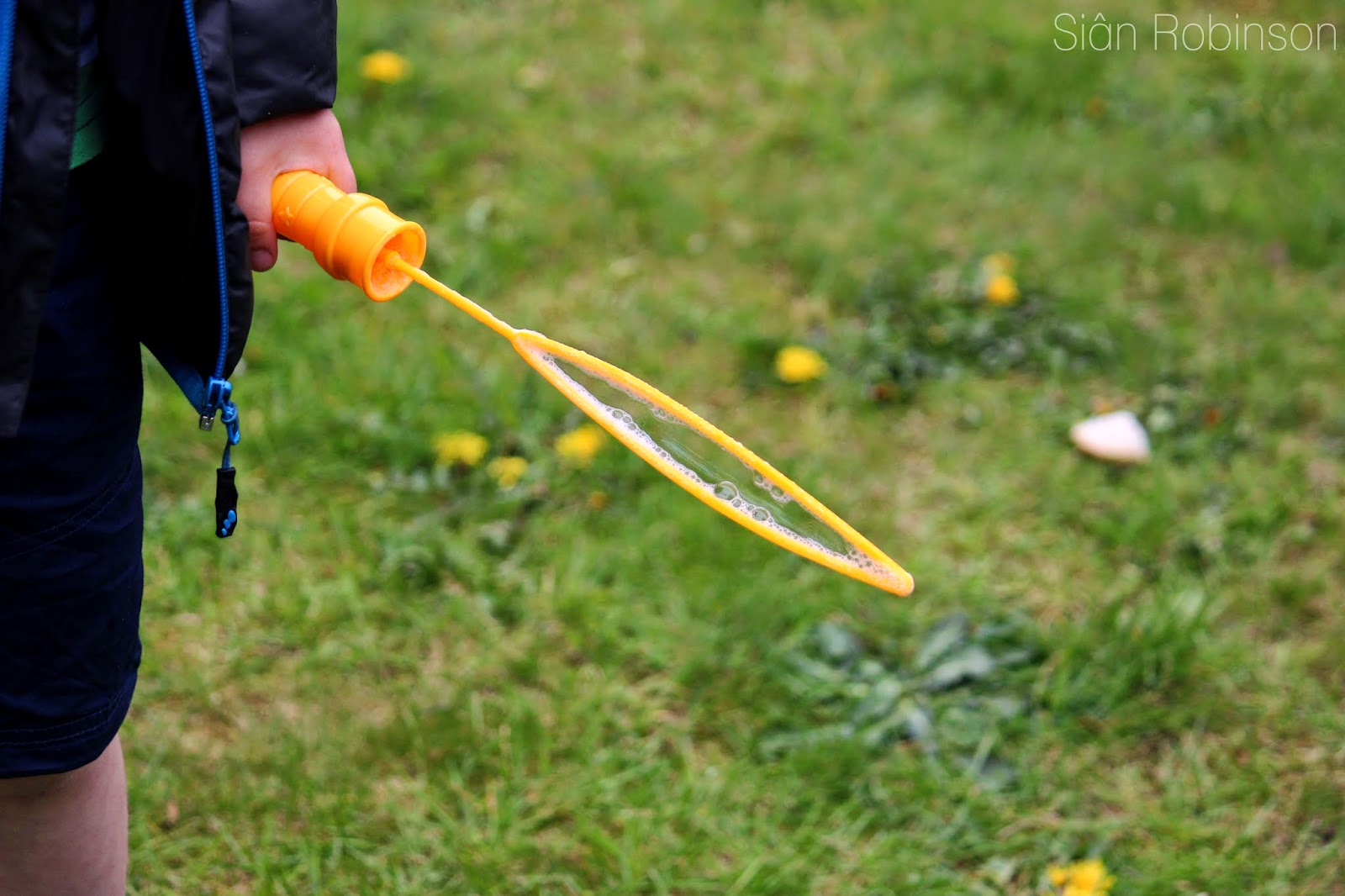 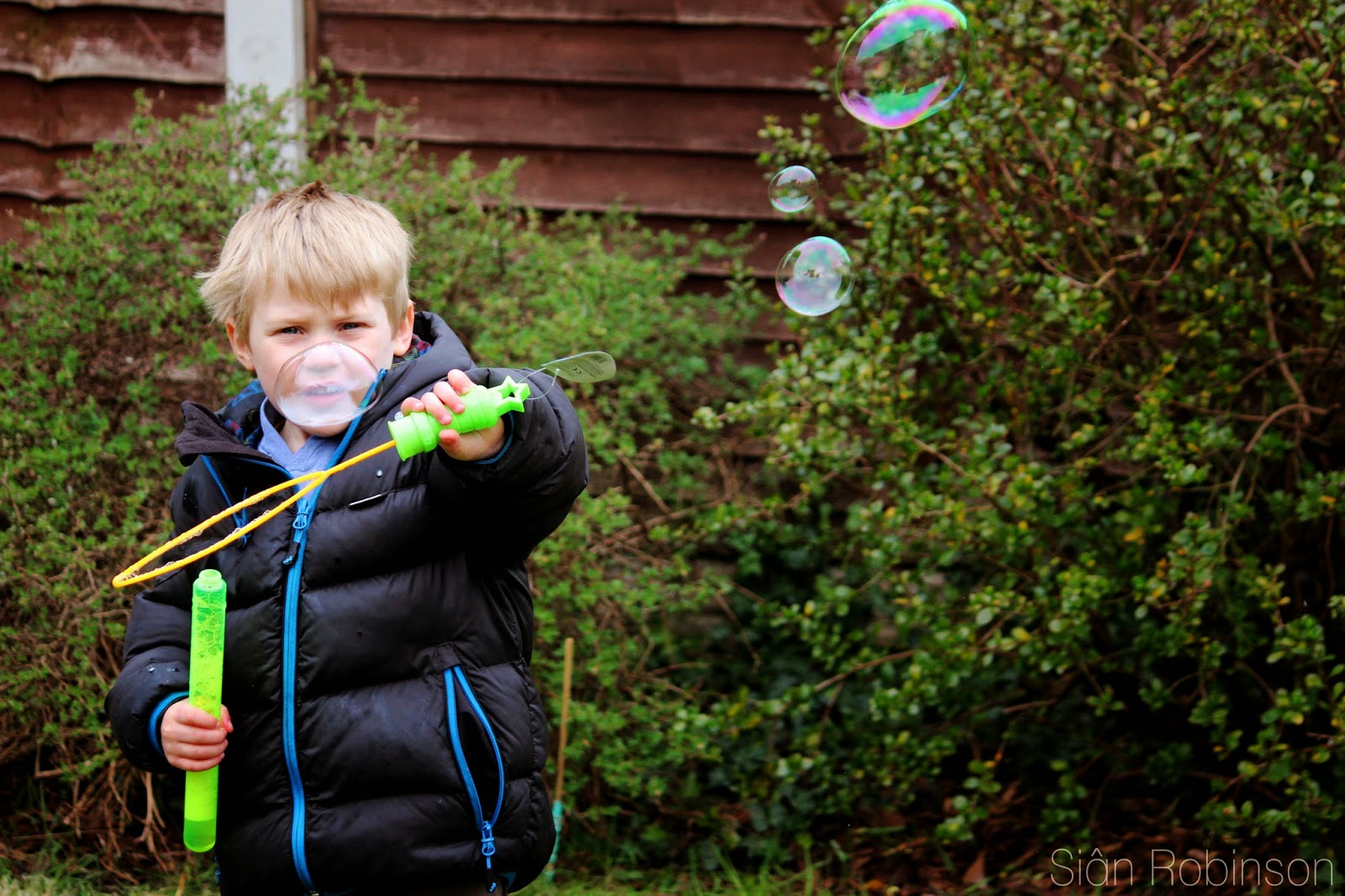 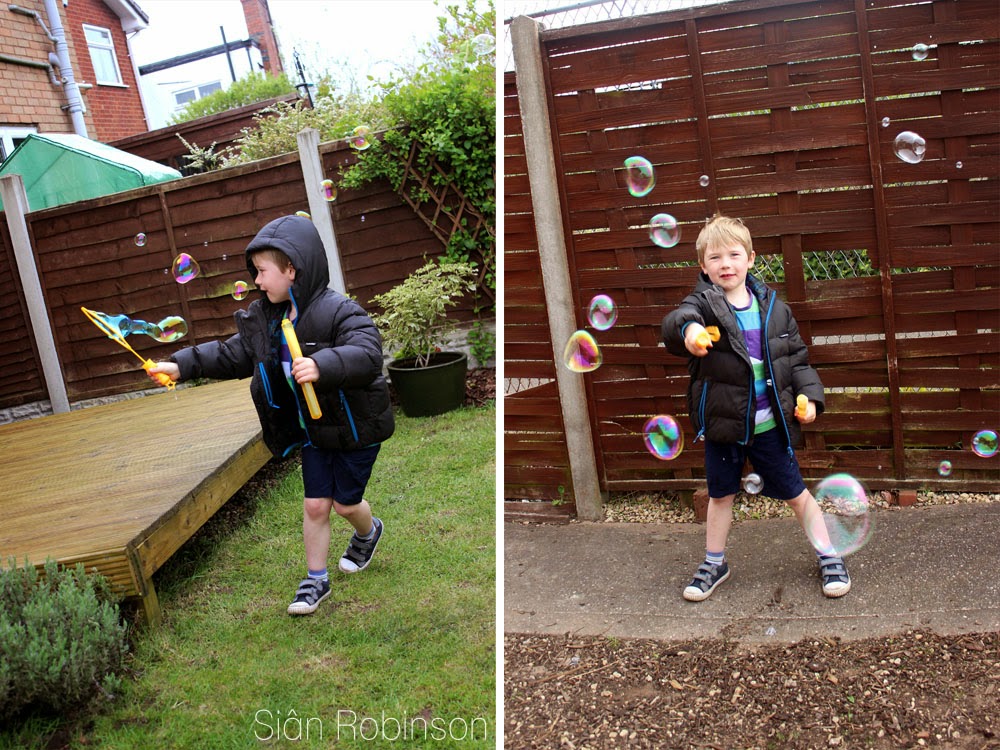 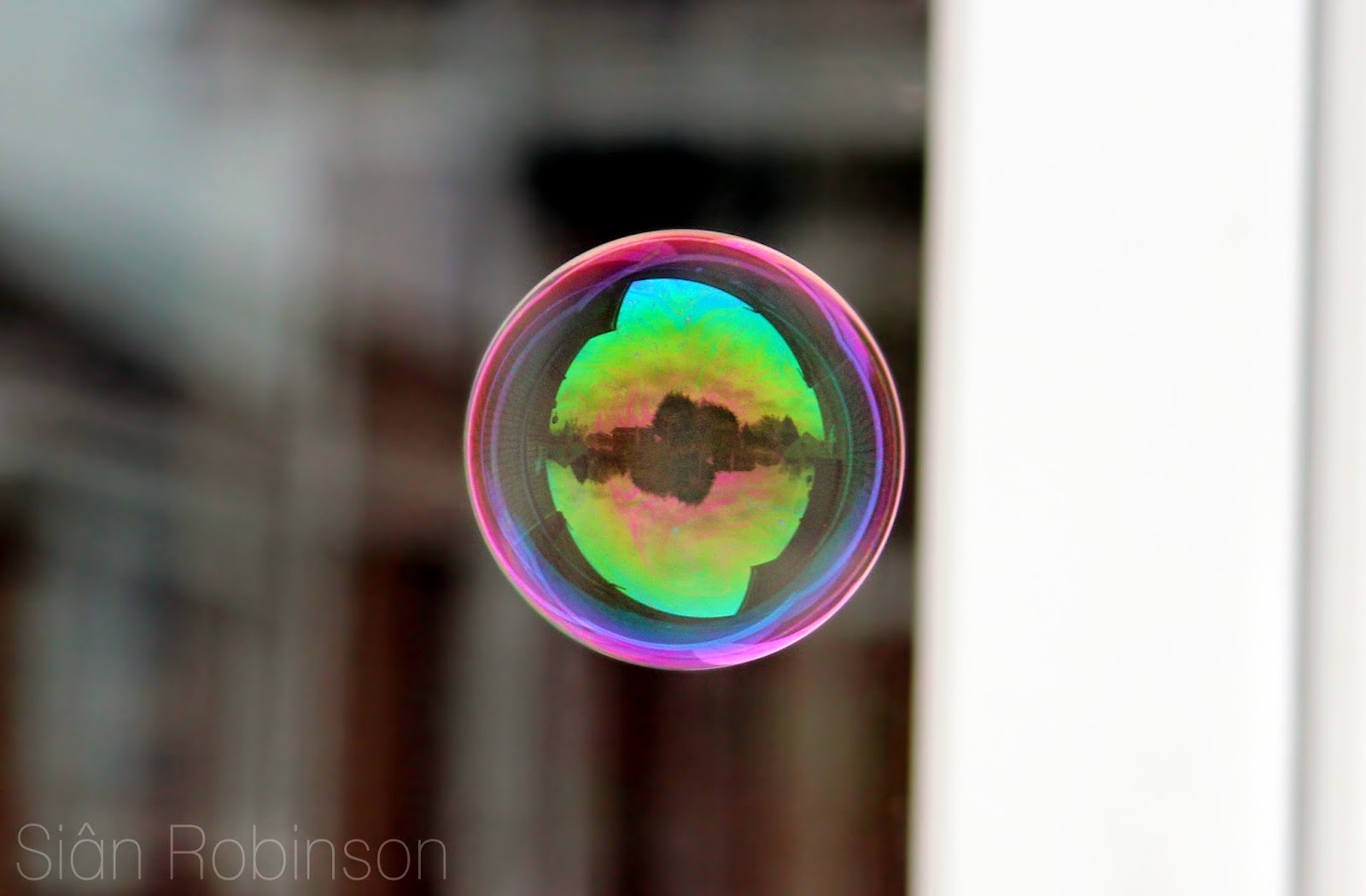 Goodness knows what I'll introduce next year x
Posted by Sian at 09:46 7 comments: 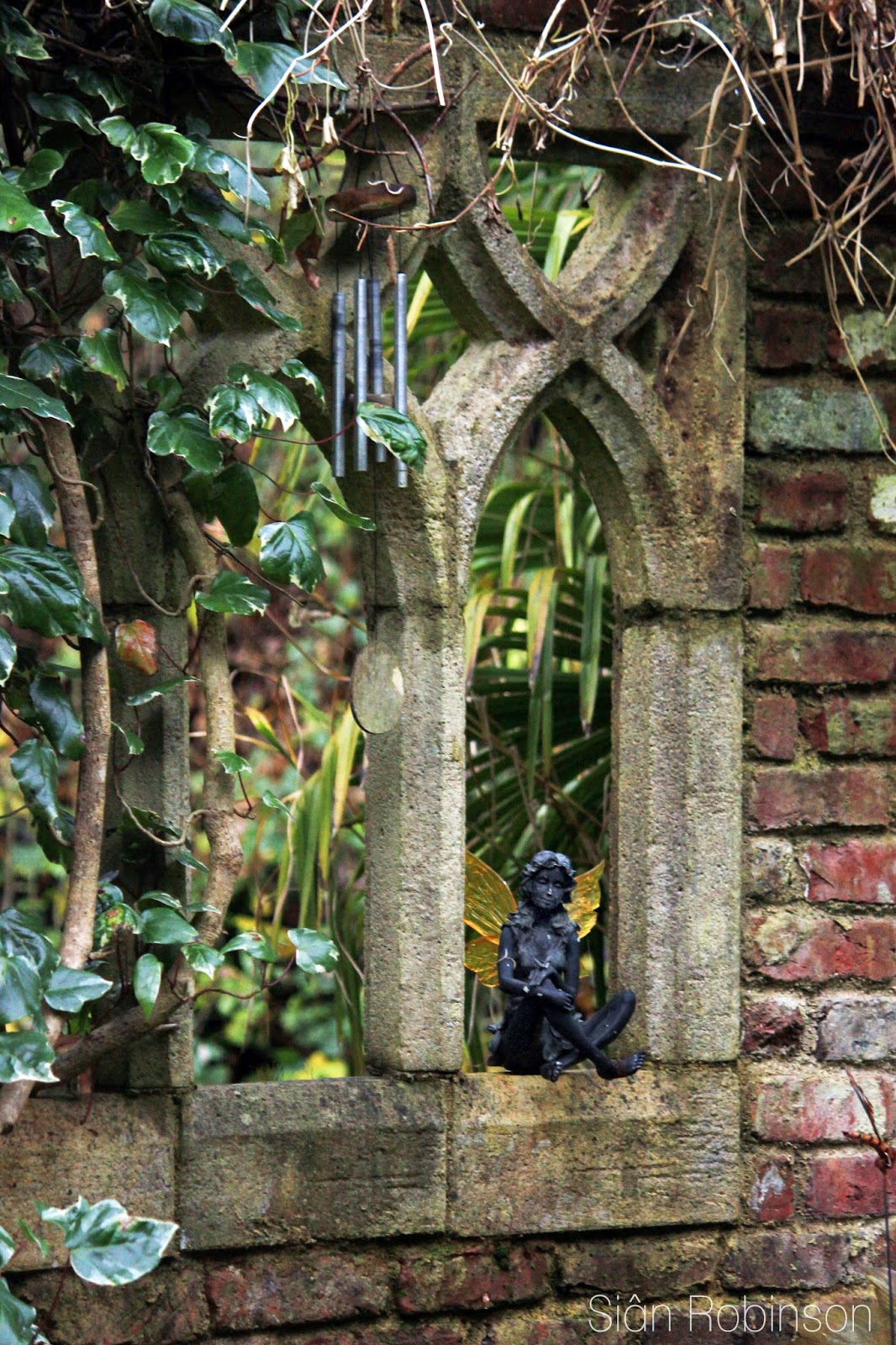 When I was young my imagination always ran wild. Every report card read 'always daydreaming', 'seems to be in her own little world', 'needs to concentrate more'...

I was concentrating actually just not on the task at hand.

I believed and imagined a great many things and it added magic to my childhood. My mum encouraged and allowed this magic. She would listen to my stories and ideas with enthusiasm. She never told me to stop daydreaming and concentrate more. I'm so grateful for that.

One evening I remember talking in depth about fairies and fairy world. Maybe from a story we had just read, I can't remember but I do remember that I was excited. Smiling she gave me a kiss goodnight and went downstairs. A few minutes later I heard this strange jingling sound. It was so out of place that I jolted in my bed. I looked over to my desk where my tambourine had been and it was gone.

I jumped to the only logical conclusion:

A ghost had stolen my tambourine and was now taunting me...

I probably wouldn't make it through the night...

In a word it scared the crap out of me.

In the morning I told my mum about the terrifying events that had taken place the night before. I let her know that she was lucky to see me alive. With wide 'uh oh' eyes she admitted to me that she had taken the tambourine to make magical fairy noises thinking it would inspire me further. It hadn't occurred to her that I would be afraid.

Strangely I still didn't doubt the existence of fairies until the tooth fairy failed to show up one morning. I was playing with toys on my bedroom floor when I saw my mum sneak behind me and place 20p under my pillow. Later I asked her for the truth. You know? Whats the deal? Are these fairies real or not? I think she could tell I was ready to know so she told me the truth. They weren't real but that I shouldn't for spoil it for younger children who still believed. I have friends who tell me when they found out about Santa they were devastated and felt lied to. In this case I didn't feel deceived, I felt grown up and in on something special. I think it was because like the tambourine, she knew when to tell me the truth. I never did spoil it for anyone. Well except now, maybe I should have put spoiler alert on here...


Back to the present day, the boys found something special in the garden this morning...
They were a tad excited! 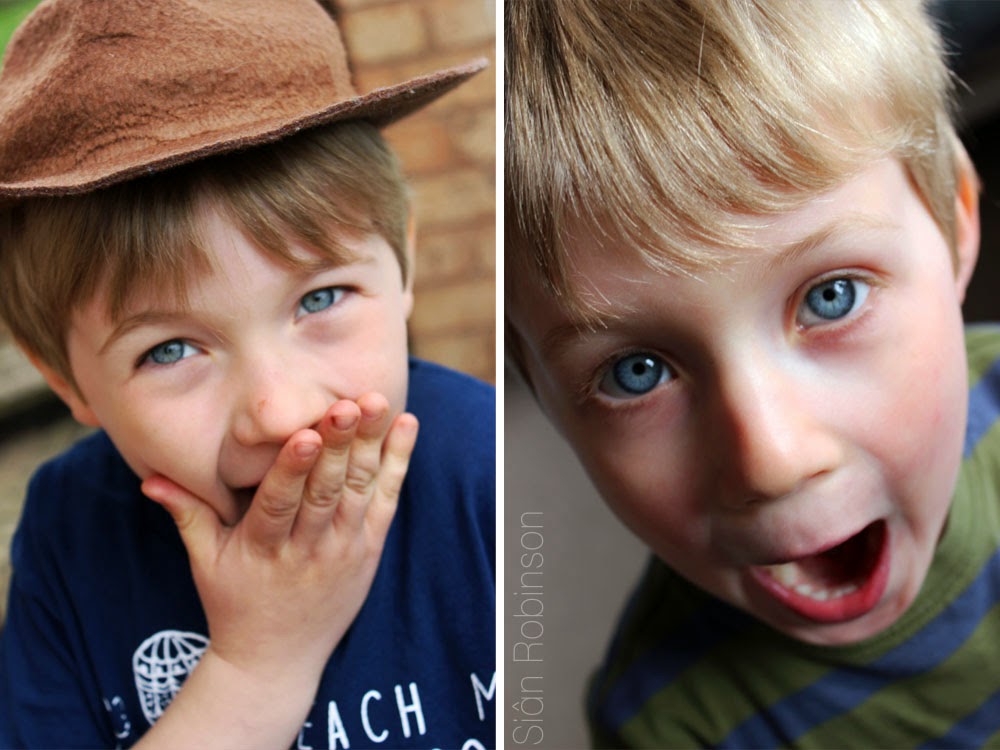 However I have been a little conflicted about all this  With this door I was determined to let them make their minds up. I was ready to ask 'well what do you think?' but it took me by surprise when Isaac asked outright 'did you put it there mummy?' I almost shook my head no but stopped myself and went instead with 'what are talking about let me come see?'. I even fake walked the wrong way which Tim thought was hilarious. I found myself saying 'maybe it's a doorway to pixie land...'

And I regretted it though when Isaac said his friends might not believe his mummy didn't put it there. I wondered if his unease came from some doubt he had too. I just repeated 'um what do you think...?' This magic making stuff is tricky...

I'm torn between telling my children the truth when they ask and allowing for the excitement on their face like when the tooth fairy came and left glitter all over the bed. Messy little thing...

I wondered what is the difference between this and the fact that the Easter bunny is coming tomorrow? I realised the difference is that he asked me outright if I put it there. And I felt weird about that. So in the end I admitted that I bought it hoping to bring some magic into the garden. Initially he was a little disappointed and I thought oh crap I've ruined it. Now wishing I had left it alone I showed him the door online and read to him the description:

This door can also accommodate pixies, elves, hobbits, and even the tooth fairy...This door does not open except for the 'Wee Folk' that dwell within. 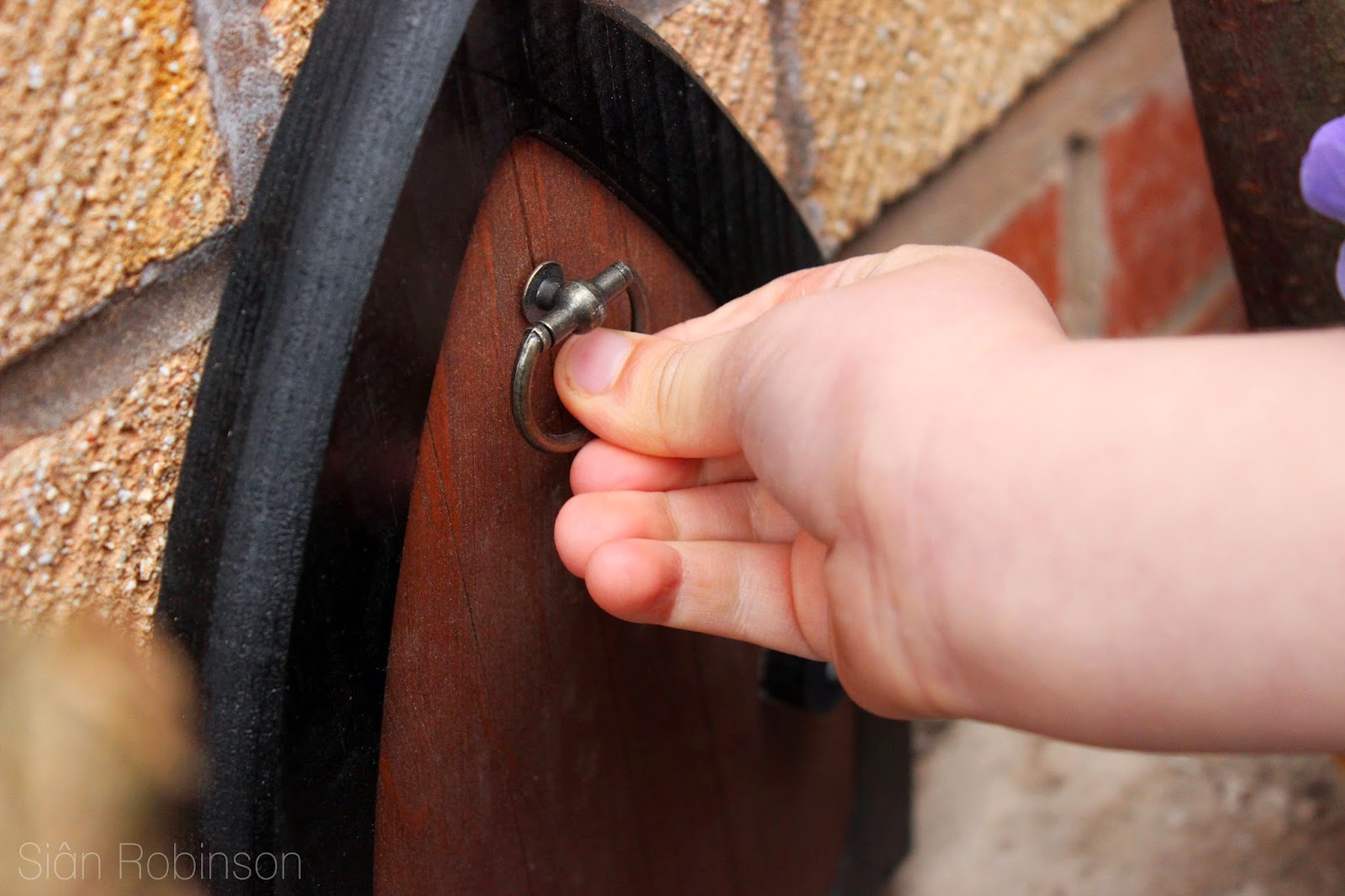 Isaac then asked 'is it magic though?' clearly wanting to believe that it is.
Yikes.
'What do you think?' I said thinking here we go again...
Yep definitely magic! he assured himself.

Good grief what a pickle I made of that! I think i'm going to stick with what do you think? line and stop elaborating and over thinking. There is no need to make tambourine noises here, I will just let his imagination run wild. Since he is just like his mummy it probably will. 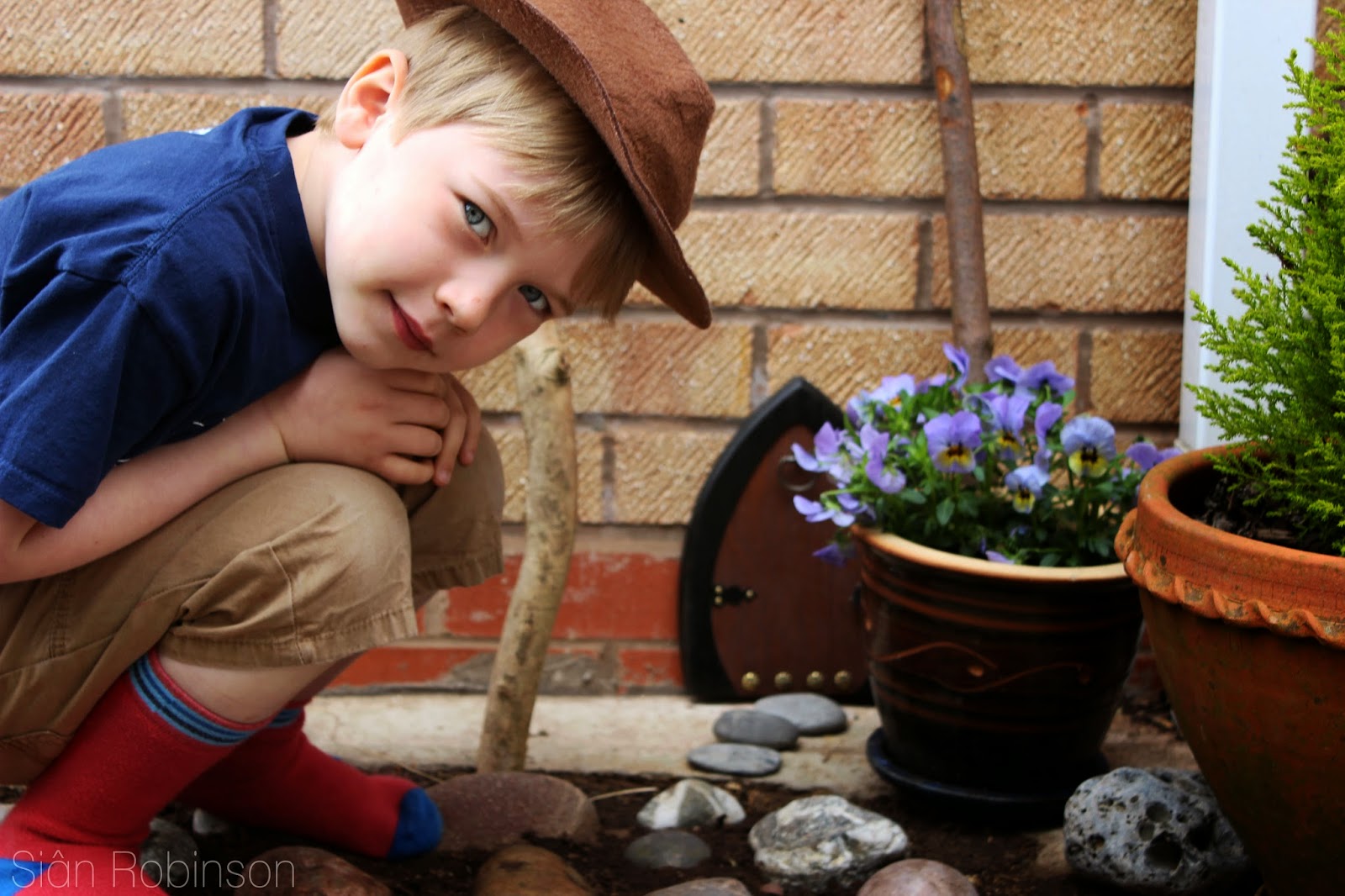 Let me leave you with this though. Isaac pointed out that there was a little bit of glitter near the door. I didn't add glitter although I wish I had thought of that!

I looked closer to see what he was misinterpreting as glitter and he is right.

There was actual glitter by the door, I kid you not...

I think I need to ring my mum as ask her again: You know? What's the deal? Are these fairies real or not?
Posted by Sian at 11:29 9 comments: 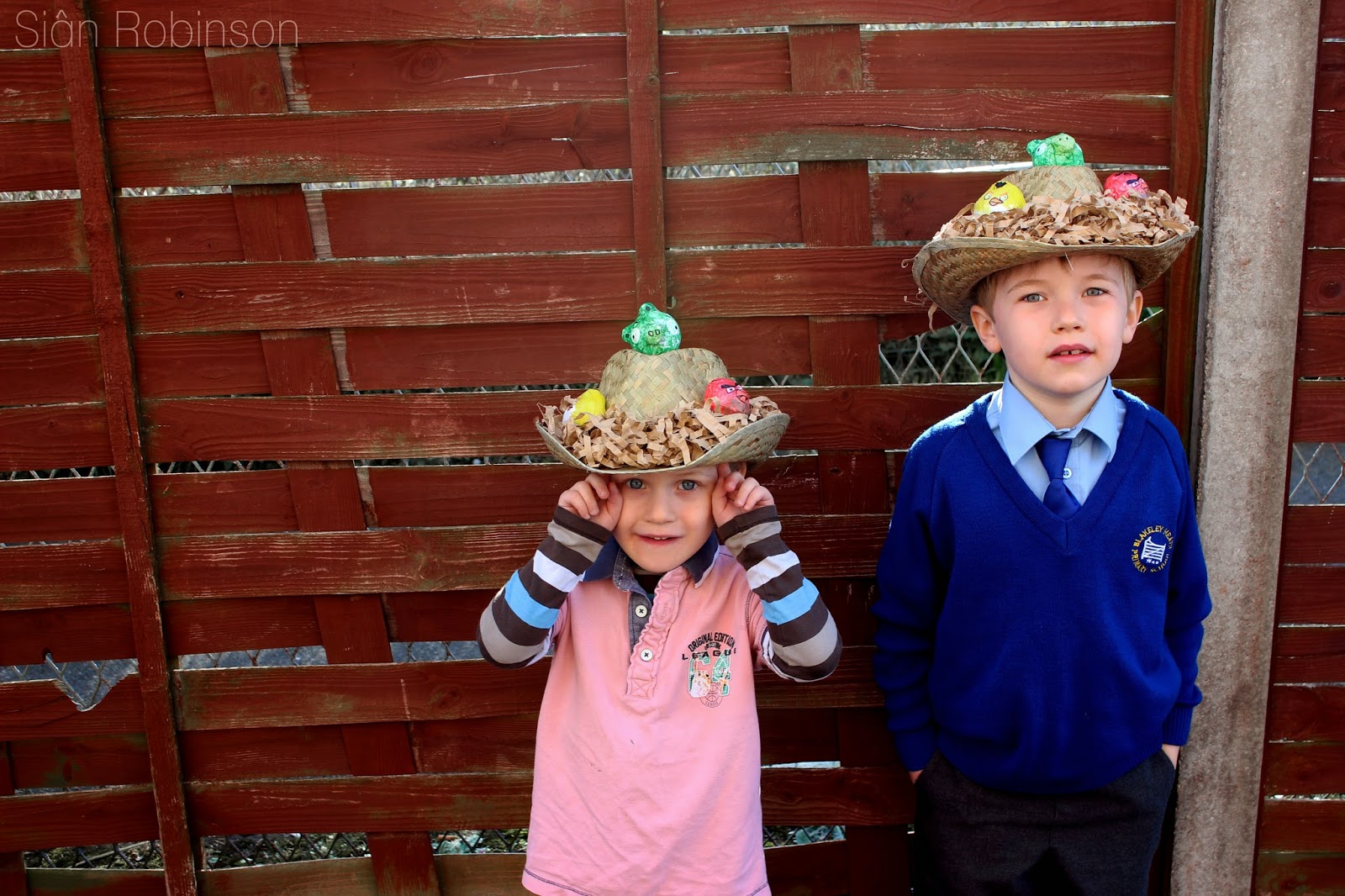 A lot less elaborate than last year. Isaac wanted to do an Angry birds in a nest hat. And Lucas was all yeah me too, angry bird angry birds!!!

Once again I enjoyed making it with them a little too much...

They helped with the paper mache and did all the painting themselves.
(Tim took this photo with his phone. I was too distracted to photograph any of it) 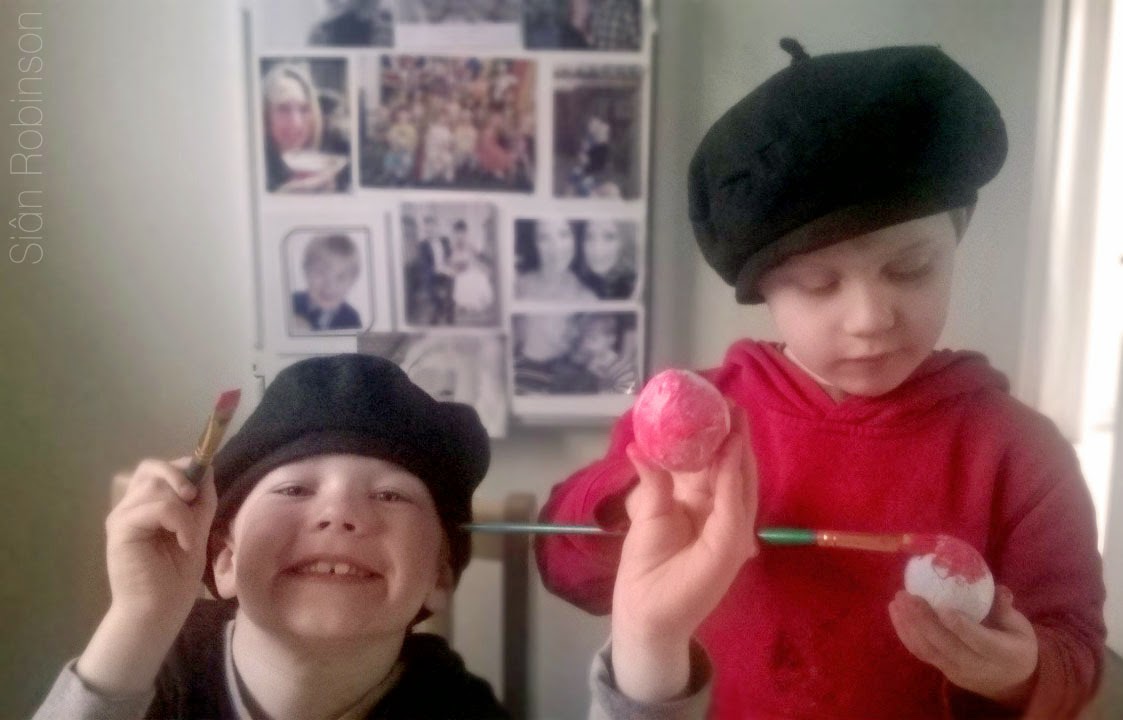 I added some of the marker pen at the end. 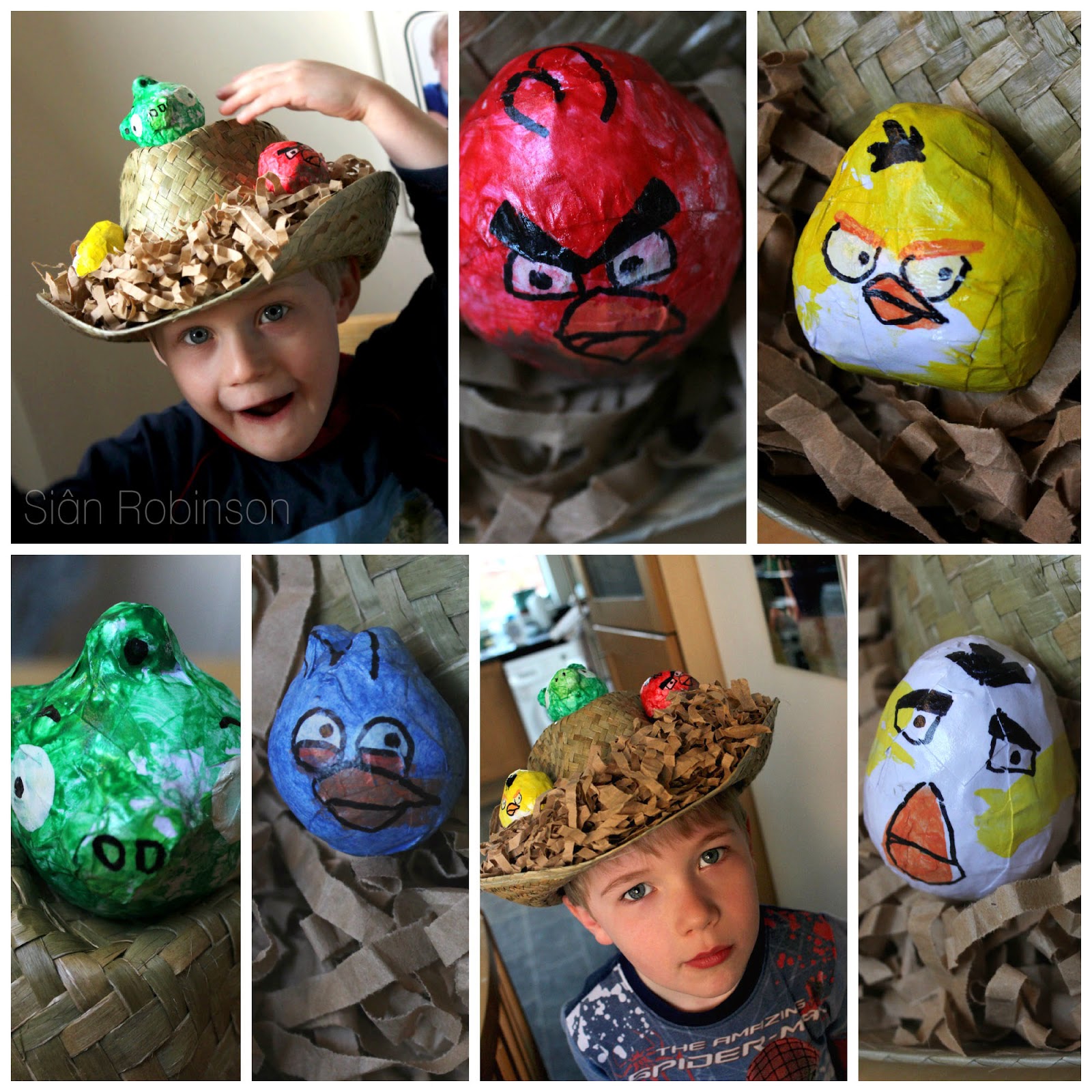 The bonus of these hats was that after they brought them home from school they removed the angry birds and played with them for hours.